Ruth Cashman, joint branch secretary of Lambeth UNISON and a library worker responds to misinformation from Lambeth Council about the destruction of local library services

“The truth is libraries are raucous clubhouses for free speech, controversy and community.”

I imagine you already know that Carnegie Library was occupied because Lambeth Council tried to lock its doors to local residents as part of a plan to “decommission” four of our Libraries. As a library worker in Lambeth, I could not be prouder to stand with the communities we serve to fight to save a service that does so much for so many. At our union meeting last Monday, library workers across Lambeth discussed the occupation and how moving it is to see how much what we do means to people; we discussed what further strike action to take as part of the fight; we discussed what will happen to the service if we win or if we lose and we discussed the Council’s response to the campaign. My sisters and brothers in UNISON asked that we respond to the claims by the Council about us, our service and our campaign – here I will begin that response by taking on the key arguments from Lambeth Council against the Don’t Steal Our Libraries Campaign.

The campaigners are lying or confused

Lambeth Council’s first response to the library occupation can be summed up in this quote from the Lambeth website;

“Is it true that Lambeth Council is closing five libraries?
Absolutely not!”[1]

Who are the beastly coalition spreading the “lie” that Lambeth are closing libraries? Well they are the hundreds who’ve taken part in the Carnegie occupation, every single Friends of Library Group in Lambeth, the thousands of people who’ve joined the marches, demos and social media campaign, all staff across the library service who have lost pay taking strike action against the “fake” closures, the local MP, the Labour Party members who have passed policy against the Council’s plans in Dulwich and West Norwood CLP and Ferndale, Herne Hill, Tulse Hill, Brixton and Streatham Hill wards, local schools, 220 famous authors, the national Library Campaign, the Chartered Institute of Library and Information Professionals and the Head of Service for Lambeth Libraries who tried to present an alternative to these proposals.

In the Lambeth Cabinet universe a local and national coalition have come together to fabricate an attack on a south London library service. The Council don’t offer an explanation as to why so many have done so much to propagate the “lie” but they are “setting the record straight” at great expense. The latest includes a statement put out on the Carnegie Occupation;

It is important to set the record straight. Carnegie Library will re-open in early 2017 as a Healthy Living Centre with a refurbished neighbourhood library, new computers, the same book stock and study space. [2]

Now let’s examine these claims. Reopening a building as something else is not the same as not closing it. If I went to Lib Peck’s house, threw her out on the street, locked the doors, did up her house and reopened it as a fish and chip shop , we don’t think she would be reassured by us telling her “don’t worry, we have reopened your house as a fish and chip shop!”. But the Council also say, far more reassuringly, there will be “a refurbished neighbourhood library, new computers, the same book stock and study space”. The only issue we have with this statement is that it is not true.

I wrote to the senior officers responsible for the library cuts and questioned this totally unverified claim;

Given you have thus far been unable to produce floorplans (we are told because they do not exist), on what basis can you claim there will be the same book stock and study space?

If we are to work on the assumption that there are floorplans which have not been shared with us, from which you base the claim:

A library should include:

By “decommissioning” our libraries and replacing them with unloved and unstaffed bookshelves, Lambeth will slowly kill off these vibrant community hubs.

Amongst the most hurtful attacks on campaigners from Labour Councillors, was the idea that by calling for a libraries to remain open, the campaigners are effectively asking for local services to vulnerable residents to be cut. This comes with an unhealthy dose of “you’re all middle class croissant eaters” from the disingenuous and hypocritical ‘defenders of the vulnerable’ on Lambeth Council.

“While they knock back wine in the library, almost 5000 homeless Lambeth children go to bed in temp accommodation…”[3]

“There are other councils out there who don’t have any domestic violence services and no one made a mention because, funnily enough, those women were far too vulnerable to kick up a noise about it.”[4]

Let’s start with the fact that many of those campaigning around the libraries cuts have been campaigning around a number of other attacks locally and nationally. We have disability activists, domestic violence campaigners, housing activists and so much more amongst our number. People do take up cuts to domestic violence services, and to describe people who use or have used those services as “too vulnerable too kick up a fuss” is patronising and offensive.

Even if nobody in the libraries campaign had ever stood up for services provided for vulnerable residents it doesn’t follow that by defending one public service, you are asking for others to be destroyed. We should not accept that there is money for libraries or domestic violence services; healthcare or education. The richest 1000 families in Britain increased their wealth by 100% since 2010 – that is over £250billion. This country can afford better domestic violence services, better libraries, better schools and universities for free and better healthcare. As campaigners against library cuts, we felt stronger and more confident when Clapham saved their fire station and Lewisham saved their hospital, through vibrant community campaigns – we get stronger not weaker as more people stand up and say enough is enough.

To believe that libraries are the preserve of the middle class, separate from the services provided to vulnerable people, requires a total lack of understanding of what libraries are and who they serve. Libraries are used by people who cannot afford to buy all their books on Amazon. They are used by people in overcrowded, unsafe or precarious housing to read, write, and access services. They are used by people who need support to access the internet for jobs or benefits. Jane talks about the cuts to domestic violence services, in particular to refuges. The library staff have personal and professional experiences of refuges and we know they can save and change lives. We also know the people living in them are some of the families who most need stories, space, advice and information. It is the oppressed and the poor who will lose the most by taking away libraries. Lambeth Libraries are also used by better off residents, with easier lives – that is no source of shame. In order to strengthen our community, people of all incomes need to mix together, how else people could ever understand the lives of people who are different to them? High-quality universal services break down barriers between people with different experiences and level up the expectations of services for poorer residents. Lambeth’s vulnerable residents should expect and receive library services which middle class families also use and value.

Cuts have to be made

The Labour Party in Lambeth rightly say, that there has been an attack from the government on our local services. They say, given the scale of the Tory cuts there is little they could have done. They say they have to make a budget, thatthey have to be responsible.

We know changing such a valued local service as Carnegie library is a difficult choice and has caused upset and concern from a passionate group of residents and union activists.

However Lambeth has much less money to spend on our services. The government has slashed our funding by 56%. And we have to find another £55 million in savings in just the next two years.[5]

However, we will not be lectured on libraries versus children’s social care when in possession of a report signed by 16 council officers who each individually earn more than the entire budget for children’s books across ten libraries. Nor will we be lectured on the need to make savings when presented with such woefully inaccurate and inadequate financial information, or a report that shores up the financial future of an external leisure company but dumps the council with potential exit costs. We keep being told that the proposals make savings but when pressed nobody can say how much. We will state here and now that Lambeth Council have nothing in place or in planning that will make the savings they claim for the Culture 2020 proposals – the union, community campaigners, Labour Party Members and Friends Groups have asked for evidence to the contrary but none has been forthcoming.

The council are spending millions to put gyms and a cinema into – all the savings they claim they’ll make are far in the future if they happen at all and right now with two libraries shut the service costs more than when it was open. This is because the building costs still lie with Lambeth and the staff are still employed, but there is now the cost of 24 hour security on top.

These plans are not about budget cuts they are about egos and reputations of those who have put forward unworkable plans and don’t want to admit they have failed.

Away from these particularly bad proposals – it’s true there isn’t enough money. There isn’t £90 million worth of waste and “jobs for the boys” in Lambeth. What’s the answer to “What more can we do?” The answer from Lambeth’s trade unions is we want you to fight with us. You make a choice to pass on those Tory cuts without even trying to defy this government.  You say “We have to do the responsible thing” – but when Labour Councils did the responsible thing, the government thanked them by making even deeper cuts. It is not responsible to sell off your libraries; to dismantle services which save lives and make life worth living. It is cowardly and it is disloyal to the people who voted for you.

If the Labour Party, which should be our party, continues down the road of wringing its hands and administering the Tories’ cuts, then it will be complicit in the devastation of our communities. Our councils will be forced to break the law – not by defying the Tory government but by increasingly failing to deliver statutory services. Liverpool, Newcastle and Portsmouth Councils have said that are at the tipping point of failing to meet their legal duties. 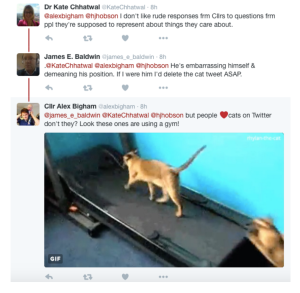 The last Councillors response to library campaigners’ demand for action, or even information, from the Council is this from Alex Bigham.

At this point, I am lost for words.

If Lambeth Council wish to refute any of the claims in this article, we invite them to provide documentary proof and to debate us publicly before the people we work for.

Some footnotes for you