Support the Lambeth ‘Save our Libraries’ fight

Closing libraries is short-sighted and irresponsible and that public libraries are an essential part of a functioning literate nation. Closing libraries in a time of austerity is like closing hospitals in a time of plague. In the last Public sector spending round, the Tory government pushed through cuts of £6.1 billion and are looking to go even further: Local authorities are now struggling to deliver statutory services or even stay afloat. The overall budget of many authorities has already fallen by as much as a third. Lambeth Council have announced that they want to make 1,000 staff redundant over the next two years and £100 million cuts. Its time Labour Councils stood up to Tory austerity.

On 1st April 2016, contrary to the desires expressed in a consultation to keep libraries open, Lambeth Council will hand over three of their Libraries to Greenwich Leisure Ltd (GLL) to turn into gyms (these are big public assets which are being given away to GLL on 25 year ‘peppercorn’ rents); sell off Waterloo Library and hand Upper Norwood Library to a trust to run the building with no staff.

Unison, the Friends of Lambeth Libraries and the Save Libraries campaign have organised supporters to oppose the Council’s plans and have lobbied, taken strike action and demonstrated at levels unseen in recent years.

The strike for fair pay in FE on 24 February was the first joint UNISON and UCU pay strike in over 10 years. Members are furious about the Association of Colleges insulting 0% pay ‘offer’ and we made our opposition felt at colleges across the country.

The joint UNISON and UCU picket lines were solid at all college centres. Strikers then went up to a rally in Central London. In her speech, Sally Hunt congratulated strikers and paved the way for further action: “If we have to do this again, then we do. Every step of the way challenge AoC’s policy. We should be very proud”.  Gorden Marsden showed Labour support for our strike, for our vision of education and our concerns about the upcoming area reviews.

There was a lot of coverage of the strike on social media with colleges across the country from Manchester to Birmingham and from Bristol to Southport. Well done to everyone. UNISON’s National FE and 6th Form Committee are meeting on Friday 4th March to discuss next steps in the campaign for a fair £1 an hour extra for all staff.

Staff in FE haven’t got a pay increase since 2009, and with the cost of living increasing they have actually lost around 17% of their pay. This was a national strike to try and force the employers to take staff wages seriously.

The FE sector has suffered huge cuts since 2010, as the Tories have gutted public spending. They use the excuse of paying off the deficit, but as we know, the deficit has grown since 2010. All the while libraries are closed, schools face cuts and the NHS is being privatised. 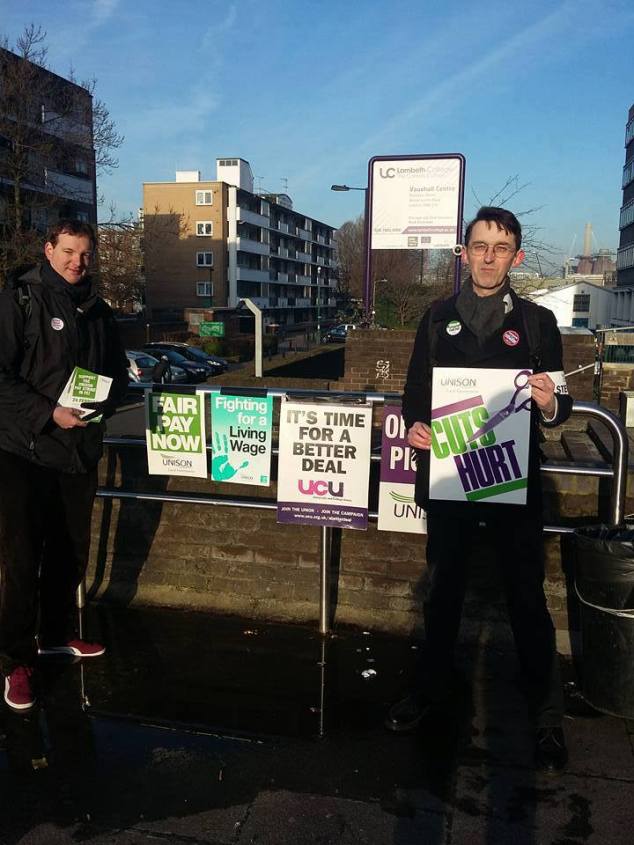 Lambeth Unison Branch Committee has agreed to hold a consultative ballot of all UNISON members employed by the London Borough of Lambeth to ask you if you would be willing to take strike action as part of our current dispute over the Council’s plans for Libraries.

END_OF_DOCUMENT_TOKEN_TO_BE_REPLACED

On the 1st April Lambeth Council plans to padlock the doors of five of our libraries. We love Lambeth libraries – which in the last 12 months have become one of the most improved libraries in the country. This is testimony to the hard work of the library staff, many working knowing that the council’s axe is hanging over their jobs and workplaces.

There is an alternative proposal in front of the council that will save jobs and keep all the libraries open. The council aren’t listening to what the people of Lambeth want.

This protest is a really important as we open up a month of action against their plans. Please come along to Windrush square in Brixton on 5 March at 10.30am – bring home made banners, whistles, your favourite books and friends.  The Facebook event is online here. 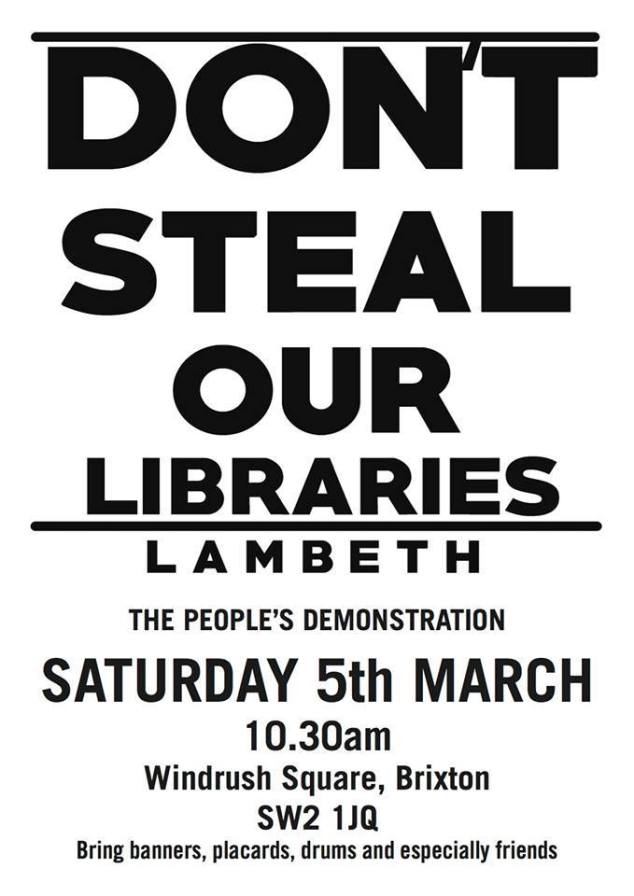 All libraries were closed today by Lambeth Unison members taking strike action to stop the decommissioning of five libraries in the borough. Thank you to the Lambeth College staff Unison members, NUT, UCU, Unite, GMB, RMT and ASLEF members and members of the public who came down to the picket lines to show such solidarity. We all want to keep the library service open so it can serve the people of Lambeth. Our fight is your fight ! 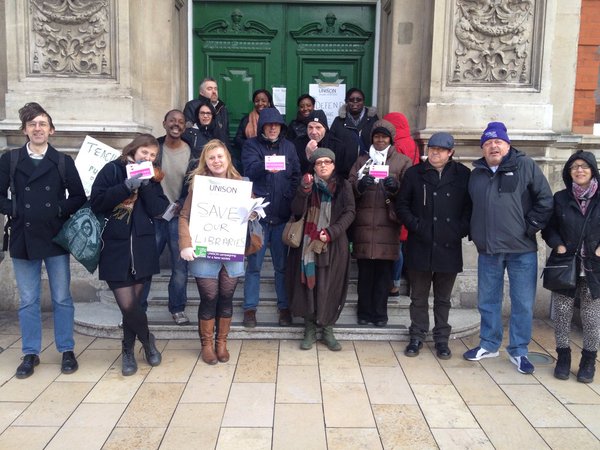 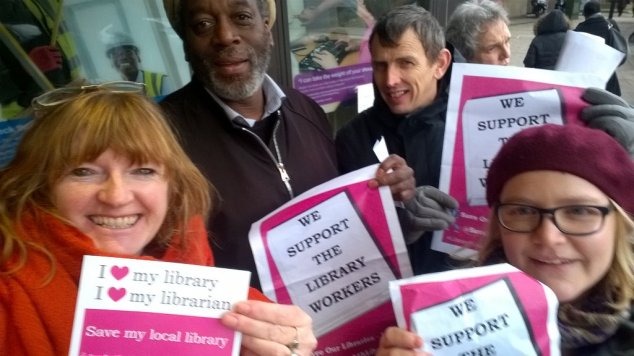 Please download and take a photo of yourself holding this to show some solidarity! Tweet it to @LambethUnison 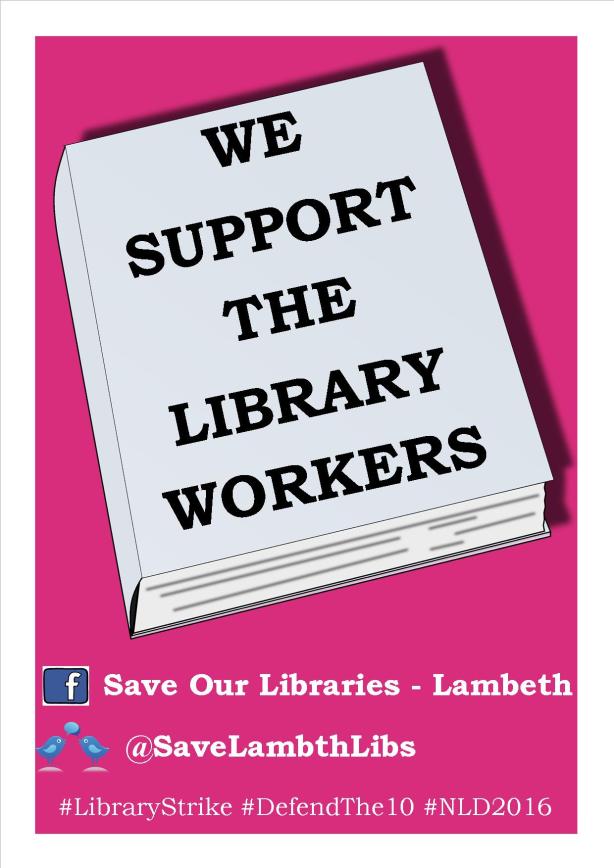 Ruth Cashman, joint Branch Secretary of Lambeth Unison thinks that some of the local councillors just aren’t aware of how devastating the consequences of cuts to the libraries are on the local community
END_OF_DOCUMENT_TOKEN_TO_BE_REPLACED