The Friends of Lambeth Library have issued their latest newsletter with important dates coming up.

END_OF_DOCUMENT_TOKEN_TO_BE_REPLACED

Lambeth UNISON members organised a rock solid strike across the borough on 22 and 23 March to protest against the closure of four local libraries by Lambeth Council. Pictures and videos below! END_OF_DOCUMENT_TOKEN_TO_BE_REPLACED

Lambeth UNISON has launched a consultative ballot across the council work force today.

The ballot asks council members whether they are willing to take action in support of the ongoing libraries dispute.

Dan Jeffrey, vice chair of Lambeth UNISON said; “We have launched a ballot today across the Council workforce to take industrial action in support of our colleagues who are fighting to save the library service. Other than for a national issue, this is the first time the branch has taken a Council wide ballot for industrial action in many years. This shows how passionately our branch feels about saving the library service which is such a crucial resource to the local community. It is a service that is not only a vital educational resource for many people, but also a facility and space that provides a multitude of services for the community. The libraries provide a life line for many people whether this be getting assistance in filling in housing benefit forms, being a refuge for those who have suffered domestic violence, providing translation services, or providing a space and play groups where parents can bring their children to. I have never seen such a passionate response from the workforce and local community in 20 years of trade union activism. The councillors need to listen to their community and change course.” 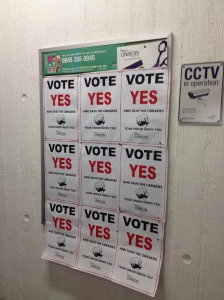 UNISON activists have put up posters in the major council buildings, and leafleted every desk. There will be more stalls and floorwalking later this week to get the vote out. If you are a member of UNISON in the council and have not got your email then please contact us and we will send you a link.

Over 500 people joined the protest on 5 March to show opposition to the councils ludicrous plans for the library service in Lambeth. The protest was a brilliant show of public support and sent a clear message to the council – campaigners won’t stop until every library is saved. 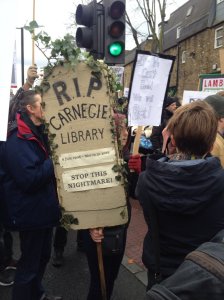 Carnegie Library, opened in 1906, threatened with closure by Lambeth Labour in 2016?

Roger and Tim from Lambeth UNISON addressing the rally

Speak up for Libraries banner on the Lambeth demonstration

They were joined by local writer Will Self who slammed the ‘healthy living centre’ plans for our libraries. Attacking the claim by some Labour Councillors that mainly middle class people use libraries, Will pointed out that “Libraries are places where some of the most disadvantaged people can go.”  This was backed up by UNISON joint branch secretary Ruth Cashman who explained the kind of people she helps on a daily basis, people needing help with housing benefit forms, women needing support from domestic abuse, newly arrived immigrants learning English and children doing their homework because there isn’t a computer or enough space at home for them to work. 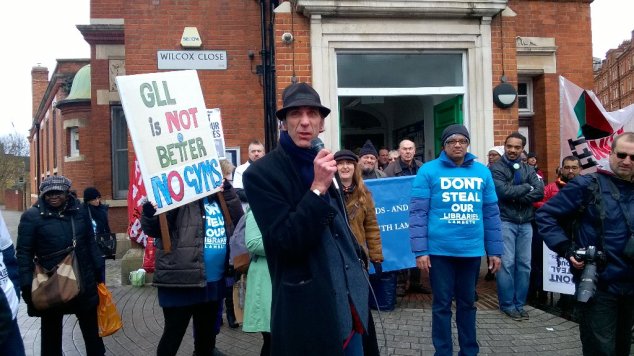 Will Self on the demo

Will Self explained what Gymtrification actually means in Lambeth; “I see the closure of these libraries as the front line in the class cleansing that’s going on in inner London”. He raised a laugh when he pinted out that; “Nobody wants to see a load of well-toned, wanker bankers cycling to nowhere in the Tate library…”

The demo makes its way towards Stockwell

But the fact is that the current plans from the council are in tatters.  Keeping Tate South Lambeth open as a library, alongside Durning, was a huge victory for the campaign. But the decision to keep the archives in Minet will require library staff to remain onsite, and mean there is hardly any space for the supposed gym equipment from Greenwich Leisure Ltd (GLL). Carnegie library is being preyed on by another trust run by councillors and ex councillors which does not have the backing the local Labour Party branch.

Even if GLL does take over the buildings, the feeling of anger from local people is so strong that it is hard to imagine anyone using these facilities. GLL would be losing money hand over fist to run gyms in the libraries, unless of course Lambeth council throws good money after bad to keep them afloat.

The council has also failed to be clear on key aspects of the deal with GLL.  What rents are being collected for the buildings? They have been described as “peppercorn”. What health and safety plans are in place? Has a risk assessment been done? Can children use the buildings? Recently UNISON was told by senior council management that they “didn’t know” if children under 16 could use those buildings.

With three weeks to go the councils plans are a shambles. And it is hypocrisy that they have rejected the proposal from Susanna Barnes – which they had for 12 months – when they have just nodded through a ridiculous plan for the healthy living centres.

The message from UNISON and local people is clear – there is still time for the council to come back to the table and work with us on an alternative proposal. Otherwise the current council will always be remembered as the Labour council that handed over 100 year old libraries to a gym company.

On the eve of a major demonstration against library closures, Lambeth Council have rejected a proposal to keep all ten of the libraries open.

“The proposal by head of the library service Susanna Barnes has been rejected because it “would not provide the necessary savings by 1st April 2016”, something that their own proposals also fail to do.

UNISON believes the council has acted hypocritically. They had the alternative proposals for 12 months and sat on them. The Council only started to consider the proposals seriously earlier this year, when forced by campaigning; including community demonstrations, strike action and near mutiny in the local Labour Parties.

The Council has now rejected the alternative claiming it cannot be implemented in time but neither the council or GLL have produced details on their plans for Carnegie or Minet to become ‘healthy living centres’ or a timeline for the implementation. The building could lay padlocked and empty waiting for the gym equipment to arrive.

With days to go, the council has yet to release any details of the contract with GLL: rent, floor plans, staffing or health and safety information.

Scandalously, council managers informed UNISON that they couldn’t tell us whether under-18s would be allowed in the new bookish gyms, as they were unclear how children would be safeguarded.

The Council has made a partial U-turn following a mass community campaign, announcing today that Tate South Lambeth will not be handed to GLL and instead will run a reduced service pending a further decision on its future.

“Friends of Tate South Lambeth Library are relieved that Lambeth has responded to the strong backing of the local  community for the maintenance of our library – and the strong opposition to its replacement by a gym with minimal library service. We were lucky  that the consultation on the future of TSL and Durning libraries gave the community an opportunity to express its opinion. Other Lambeth libraries under threat  have not been given this chance. Mindful that our library has been given only a temporary reprieve, we remain in solidarity with the campaign to save all Lambeth libraries.”