Motions agreed at the Lambeth UNISON conference in January 2018

END_OF_DOCUMENT_TOKEN_TO_BE_REPLACED

Following the sacking of four union reps at the Ritzy and the suspension of another at Hackney Picturehouse, activists from across the Labour movement have been taking action to support the Picturehouse workers and their Living Wage campaign.

Please join us for a rally at the Ritzy on Monday 11th September with two of the Ritzy campaigns biggest parliamentary supporters: Helen Hayes, MP for Dulwich & West Norwood constituency (which contains the Ritzy), who has persistently raised the campaign in Parliament and Chris Williamson, MP for Derby North, a shadow minister and firm supporter of trade union rights.

Lambeth UNISON members were on the picketline backing up our brothers and sisters at the Ritzy Picturehouse. 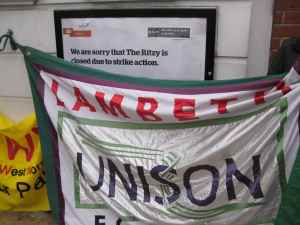 There is a solidarity demo for the cinema workers fighting for a living wage on 25th February -12 noon,  Leicester Square, London